With the framing done and the sheathing on, it was time for windows. Of course, they had all been ordered months ago. I already had the basement windows, which had been built two years prior to this, so I installed them while waiting for the rest of the windows to be completed. The basement windows are Jeld-Wen, which is a company located just 60 miles away. I like to support local companies whenever possible, but the price was very high for those 9 basement windows, and the Jeld-Wen estimate for the remaining 86 windows was astronomical. So I decided to go with Sierra Pacific windows, which saved me about a third on the price. The only compromise was that I couldn't get oak for the interior wood, and had to settle for fir.

One thing that added to the cost of the windows was the custom nature of the design. I wanted a round top for all the windows which would be set in stone walls, and octagonal tops for all those which would be set in stucco walls. Anytime you deviate from standard straight-top windows, the price goes up. Installing the basement windows was easy, since they were small and easy to reach. 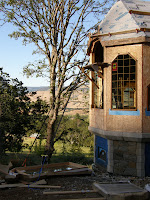 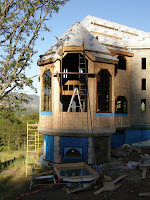 But when the first batch of the main windows arrived, it quickly became apparent that installing some of the bigger ones was going to be a major undertaking. I got a couple of inexpensive winches, bolted them to the roof, built some temporary scaffoldings, set up a couple of ladders and slowly cranked the windows up into place. Working alone (as usual), this was an agonizingly slow process. I would climb up to one of the winches, give it a little crank to raise up that side of the window a couple of inches - tink, tink, tink. Then climb all the way to ground, cross to the other ladder, climb up to the other winch, and do the same thing - tink, tink, tink. For hours. Each of the larger windows took at least a whole day. 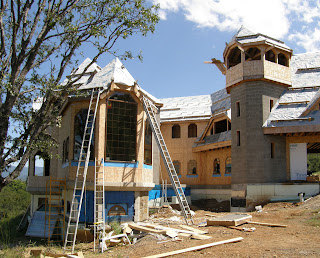 These windows were very heavy because of the thick double-pane glass. The tension on the pulley straps was very high, and I was always a bit afraid that one of them might let go, swinging the window like a pendulum and hurling me off the ladder. But everything held together. 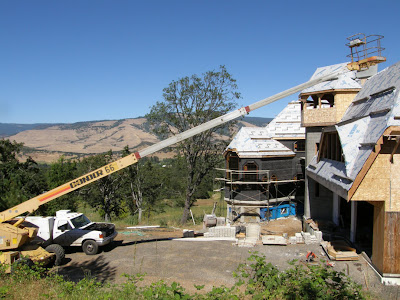 After installing a few windows this way, I decided that a boom-lift was the only way to go. Prices for renting one were in the $200-per-day range, plus the cost of trucking the thing in and out. Realizing that with the windows, roofing, stucco, etc., I was probably going to need a lift for about a year, I started looking into buying a used one. I found one on Craigslist in Bend, Oregon, about 200 miles away, and my wife and I drove there to look at it. A contractor was going out of business and had a (very) used 66-foot Condor for $9500. He was even willing to deliver it to my jobsite, so I couldn't pass it up. I figured I could use it for a year, and probably sell it for about the same price I paid, saving thousands of dollars in rental fees. If you've never been on one of these lifts, it's quite an experience. For one thing, it doesn't look like it could possibly extend all the way out without tipping over. The cage is supposed to hold 500 lbs, fully extended. Of course the first thing I tried was loading it up, extending it out all the way horizontally, and bouncing up and down. The base stayed firmly planted on the ground. However, the cage sways a lot, and I wouldn't recommend it for those prone to seasickness. The lift worked great, and suddenly I was putting in four or five windows a day, instead of just one.  By attaching the windows to the outside of the cage, I could insert them into their openings with surgical precision.
﻿
﻿After about a week the engine in the lift suddenly started making a horrible clanking noise. I thought it had thrown a rod bearing, so I took off the oilpan and checked all the bearings. Nothing wrong. I put the bottom-end back together and took off the cylinder head. There was a small bolt embedded in the top of one of the pistons. It had come out of the engine governor, and got sucked into the intake. I got the engine back together, but the governor didn't work at all, so the engine revved uncontrollably. Unable to find the exact part I needed, I found something close on eBay (evidentally a governor from a WW2 tank), and was able to adapt it. Everything worked perfectly, and the engine has been purring ever since. 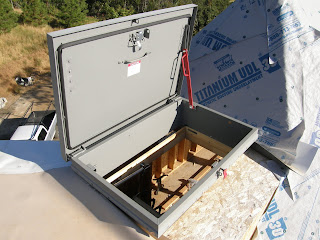 About this time, I also installed a roof hatch on top of the house, which allows access from the cupola to a "Widow's Walk" over my office, a 100-sq.-ft. sun deck with an iron railing. It's the highest point on a tall house, so the view is terrific. I ordered this water-tight hatch online, and it was pretty easy to install. 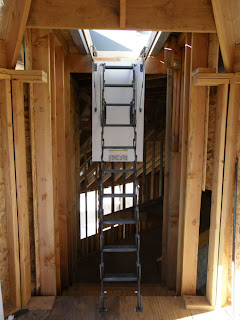 The access ladder was slightly more difficult. I ended up with an accordian-type unit, which folds up against a trap-door. The whole thing is counter-balanced with springs, so it hardly takes any force to raise or lower it. I got this system through Home Depot. It's only available by mail-order, but it only took a few days to arrive. Guests really enjoy climbing the ladder and popping out the "submarine hatch". 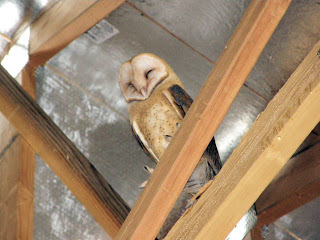 For several weeks I was greeted by a large barn owl in the house when I arrived each morning. I had to spend about 20 minutes trying to show it where an open window would allow it to get out. It was very cute, but messy - not a good pet. A different one has been back lately.

After several weeks of installation, all the windows were in and looking good. With the elimination of the wind whistling through the place, I finally felt there was a difference between "inside" and "outside" the house.


Click on 'Older Posts' at the bottom of this page for more.