I try to buy all my building materials locally whenever possible, but sometimes it just can't be done. I've always loved a green slate roof and planned to use it on my new house, but when I looked into the local pricing I got a bad case of sticker-shock. It looked like the materials alone would run about $50,000, and up to a year for a roofing team to apply the labor-intensive tiles. Well, there's no way I could afford $100,000 for a roof, so I began looking at alternatives. Fake slate has come a long way in the last few years, but to me it still looks fake. The colors and patterns are too uniform, and the plastic tiles have been known to curl after a few years in the sun. After doing a lot of research, I decided I really wanted real slate - only cheaper.

I finally found some slate companies in China that claimed to have first-class stone at rock-bottom prices. I calculated what I'd need, and sent for a quote from the Alishan Stone Company. Within a few hours I got my answer. Enough pre-drilled slate tiles to do my whole roof would run $8500, plus $4000 shipping. So, for less than the cost of a cheap asphalt shingle roof, I could have my slate roof (as long as I did all the work myself). Alishan offered several color choices, and I decided on a 50/50 mix of green and black (dark gray) tiles.


I must admit that I was quite worried about the company's requirement of full payment before the ship would leave the dock. But then I looked at it from their point of view, and decided that it was probably a pretty safe bet. I'm sure the Chinese government would take a dim view of one of their companies causing the nation to lose face by cheating an American. So I wired a money order, the ship brought my two cargo containers of slate to Portland, and they were trucked here to Southern Oregon all without a hitch.﻿﻿﻿﻿﻿﻿
﻿﻿﻿﻿﻿﻿﻿
﻿

﻿I had covered the roof with Feltex underlayment, just to keep the rain out while waiting for the slate to arrive. The slate was beautiful, and I was eager to get started. I hired a roofer to show me the ropes. He had just finished a slate roof on a 21,000 sq. ft. house, so he was quite experienced in using the material. I bought an inexpensive tile saw, which makes cutting the slate very easy, but the downside is you have to measure and cut them down on the ground. The roofer preferred to use a hand-held Skillsaw with a masonry blade, while he stayed up on the roof. My boom-lift was a necessity for this job. After a few days of working side-by-side with the roofer, I took over. My year-long roofing job had begun.


Doing a slate roof is a painfully slow but satisfying process. You lay out chalk lines (allowing for the proper overlap) and start nailing on tiles. It has to be done by hand, as nail guns might break the thin tiles. Two copper nails per tile. By the way, copper nails are very expensive now, but I got a good deal on eBay. If overlapped properly, no underlayment is actually needed - the tiles and gravity will shed water and keep the plywood sub-roof dry. 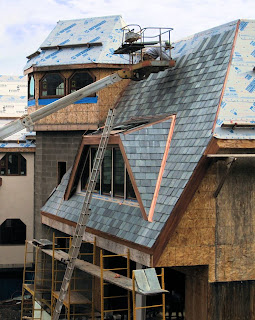 If you want a roof that will literally last a thousand years, slate is the only way to go. Though it's brittle and will break at a blow, it's totally impervious to the weather. In Europe, workers strip centuries-old tiles off ancient houses, then use those same tiles on new houses. It's also fireproof. Traditionally, no waterproof underlayment is needed; the overlapping tiles should be able to shed water.

There are a lot of individual surfaces on my roof, and an average-sized surface took me about two weeks to cover. The copper flashing required in corners, valleys, and drip edges was also time-consuming. I didn't enjoy the sheet-metal work, but nailing on the tiles was fun, especially long straight runs. Each section was so beautiful when I would get it done that I couldn't wait to start on the next. My neighbor would text me, saying how great the roof was looking from their house. I still have to finish some corners and do the cupola roof, but other than that it's done. Eventually, there will be a copper ridge on all the peaks, and copper chimneys at the corners.

Added Sept. 2014:
I have added the copper ridges to the roof. I 'antiqued' the copper by using a chemical called Liver of Sulfur. This gel is readily available from hobby shops, but I got mine on eBay. You just mix a few drops with water and brush it on the bare copper, which instantly turns a dark bronze, like an old penny. A second brush stroke turns the copper black, but it's easy to bring back some copper color with steel wool.

I had been having trouble with woodpeckers damaging the few wooden parts of the house, so I decided to mount a fake owl on the peak of the roof over the dining room, in an attempt to scare off the other birds. I found a life-size fiberglass owl on eBay, painted it bronze and mounted it on the roof. A few nights later, I heard a commotion overhead, and looked out a window to see two real owls having a party on the roof. One is actually sitting on the head of my fake owl, which I considered downright disrespectful! :)